In 2022 for the first time, the National Rosary Rally will conclude the 30th International Week of Prayer & Fasting October 1st – 9th:  https://iwopf.org/

The 2022 National Rosary Rally will take place on Sunday October 9th, starting with the National Eucharistic Procession from St. Peter’s Catholic Church on Capitol Hill to the rally site at the eastern edge of the National Mall at 3rd Street facing the US Capitol.  Rosaries will be prayed along with intentions which include: respect for life at all stages of development, especially the unborn; the sanctity of marriage and families based upon God’s creation of man and woman; upholding constitutionally protected religious freedom; and the return of our nation to God and Holiness. The Glorious Mysteries of the Rosary will be prayed simultaneously across the nation with Rosary Coast to Coast at 4:00 pm.  Nationally renowned speakers including a Bishop, Priests, a consecrated religious Sister and laypeople will address these intentions.  Fr. Richard Heilman clarifies:  “Importantly, this is not intended to be a political event.  Our hope is to influence the direction of our country through prayer”.

“I wholeheartedly endorse the Novena for Our Nation and the Rosary Rally… I urge as many as are able to participate in these great spiritual works for the sake of our entire nation.”

“May there arise a new movement of people who couragiously will pray the Rosary in public places. May “Rosary Coast to Coast” bring to all citizens of the United States, to the peopel people with governmental responsibilities, to all faithfull Catholics, to priests and bishops a spiritual grace-filled rain of roses.”

“I am 100% supportive of the Rosary Coast to Coast movement! Our world is in major trouble and we need to turn to the prayer that Our Lady has most insistently asked us to pray in all of her recent approved apparitions: the holy rosary.” 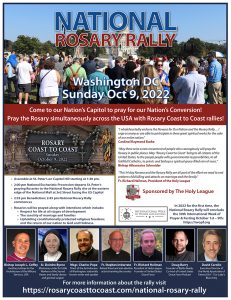 Join Our Live Stream at

Assemble starting at 1:30 pm at St. Peter’s on Capitol Hill – 313 2nd St SE, Washington, DC 20003.  If unable to participate in the Eucharistic Procession, go directly to the rally site by 2:30 pm at the eastern edge of the National Mall at 3rd Street facing the US Capitol.

• 4:00 pm – Bishop Coffey leads the Glorious Mysteries of the Rosary simultaneously with Rosary Coast to Coast 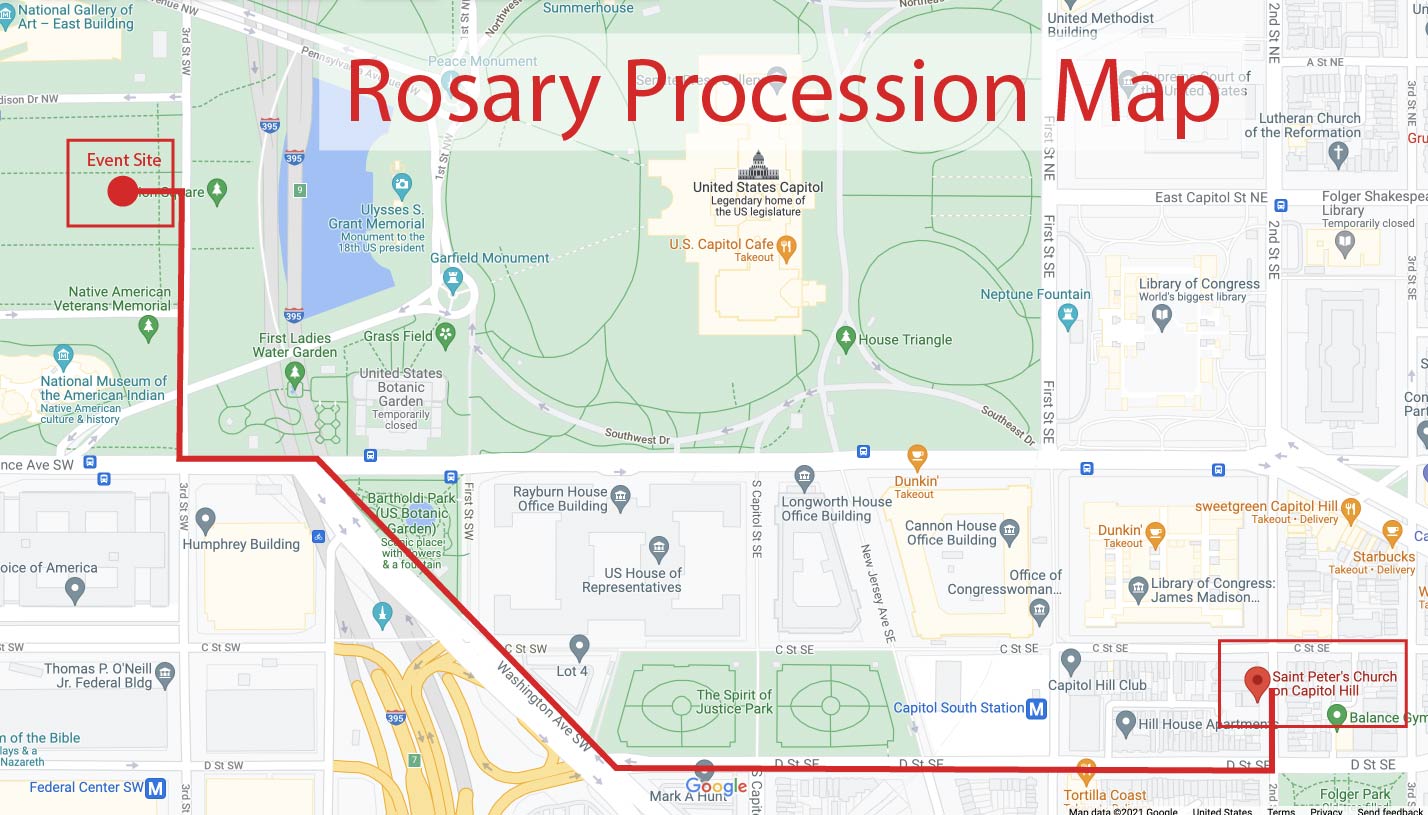 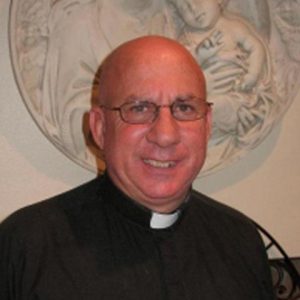 Fr. Stephen Imbarrato, an anti-abortion activist, is a retired priest of the Archdiocese of Santa Fe, New Mexico who now lives full time in Florida. Fr Stephen celebrates a live stream Mass daily as well as a daily live stream broadcast of prayer and commentary seen by thousands of people worldwide. All of his social media platforms can be accessed at Protestchildkilling.com. Fr Stephen can still be seen periodically on EWTN where he has preached many times over the years and cohosted the “Defending Life” show for 5 seasons. Fr Stephen sees abortion as the mass murder of the pre-born and believes that we can only abolish abortion by recognizing constitutional personhood at conception. 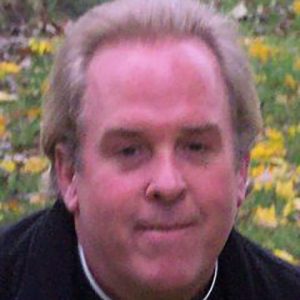 Father Richard M. Heilman is a priest for the Diocese of Madison. Father Heilman is Pastor of St. Mary of Pine Bluff. He is a past Wisconsin State Chaplain for the Knights of Columbus. Father Heilman founded an apostolate for men’s faith formation called the Knights of Divine Mercy. Fr. Heilman is a leader, with Cardinal Burke, of the Catholic men’s movement, “The Holy League.” He is the author of the Church Militant Field Manual. He has also authored seven other books, calling men, especially, to ”Special Forces Training for the Life of Christ.” Inspired by St. Maximilian Kolbe, Fr. Heilman utilizes new media to teach the truths of our faith, primarily through his teaching websites: 1) usgraceforce.com, 2) romancatholicman.com. He is the creator of the “Combat Rosary,” based on the original WWI military issue rosary. The Combat Rosary is now the Official Rosary of the Pontifical Swiss Guard. Father Heilman is the founder and Spiritual Head of the United States Grace Force (USGF). To date, over 80,000 have enlisted in the USGF. The USGF is a “special operations force” specifically trained in spiritual warfare. Father Heilman and Doug Barry lead a popular weekly podcast entitled, “Grace Force Podcast.” Father is the chaplain for the Holy Family Homeschoolers. He is also very involved in pro-life activities as the chaplain for Pro-Life Wisconsin, Vigil for Life and the Women’s Care Center. 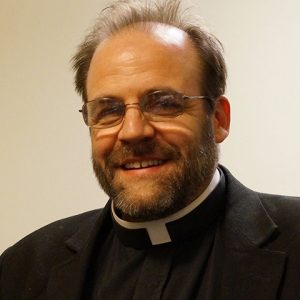 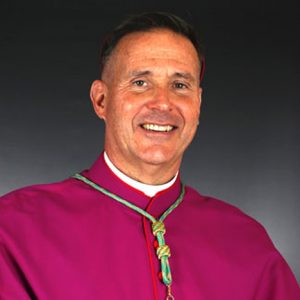 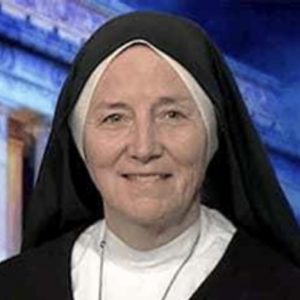 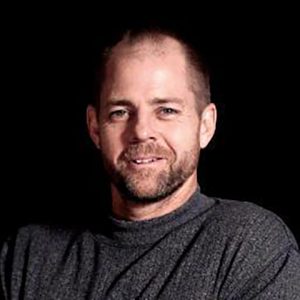 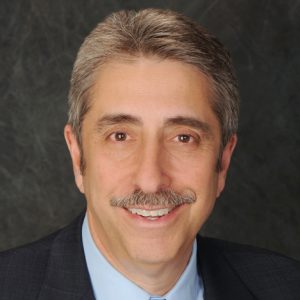 David Carollo has been the Executive Director of the World Apostolate of Fatima USA – Our Lady’s Blue Army since 2012.  He is a member of the board of trustees of the World Apostolate of Fatima International and oversees the apostolate’s operations in Portugal.  David is a Lay Carmelite, a Fourth Degree Knight of Columbus and a Knight of the Equestrian Order of the Holy Sepulcher.  He is a regular guest on EWTN television, appearing on Sunday Night Prime, Women of Grace, Bookmark, The Church Universal, At Home with Jim and Joy, and Vaticano from Rome. He was featured in the network’s Fatima Centennial specials as well as in productions of the apostolate which have been widely viewed on television stations and on social media. David is heard regularly on Radio Maria and Relevant Radio, where he is a regular guest on the Drew Mariani show and on Morning Air with John Morales.  He serves as a guest host on The Winds of Change show in Chicago. In addition, David is featured on other Catholic radio and television stations throughout the United States discussing the Fatima message and the Catholic Faith. He and his wife Dorothy are from Chicago and currently reside in New Jersey.

In 2022 for the first time, the National Rosary Rally will conclude the 30th International Week of Prayer & Fasting
October 1st – 9th:  https://iwopf.org